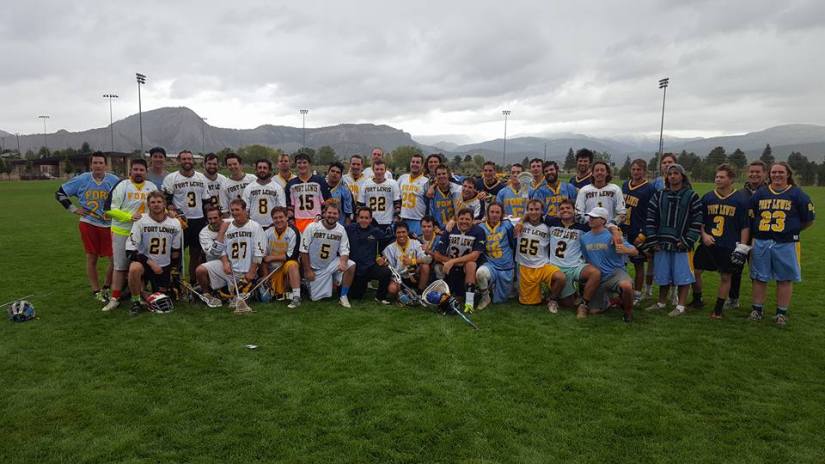 DURANGO — It was fitting that the annual alumni game featured a commemorative shirt emblazoned with the phrase ‘Fort Lax For Life’. Surrounded by friends, family, coaches and current players, Dan Riecks broke the huddle one more time wearing a Skyhawks jersey, the chant, ‘family’,  resonating across the field.

The Skyhawks celebrated Dan on Saturday, a legend in the program, who dominated on the field before taking the reins as head coach for five years. After taking on the role of assistant coach in 2017, Dan stepped down this past May to continue his teaching career in Colorado Springs with his wife, Melissa.

So the atmosphere Saturday, while celebratory and jovial, still tinged with a hint of melancholy, a good bye of sorts to a person who means so much to not only the Skyhawks lacrosse program, but the entire city of Durango.

The end of an era and the beginning of a new one.

The alumni, with a showing stronger than most years, saw the opportunity to send Dan off with a bang, and took advantage, winning 12-9 on a typical Durango afternoon. Snow showering the mountains overlooking town, while the sun shined down on one of the most beautiful campuses in America. The campus in the sky.

Across the field, as conversations carried on and fans cheered, the true spirit of Fort Lewis lacrosse was seen in full display. The final whistle blew and the guys swelled at midfield for pictures and to break it down one more time. The shirts were handed out, and everyone saw the phrase. The one Dan taught us all, the phrase we’ll carry on forever through friendships and memories, the phrase we will always remember, ‘Fort Lax For Life’.

COMMITTED: Welcome to the team Ethan Carmona! Ethan, the third Carmona brother to come to FLC hails from Frederick, MD where he played midfield for Governor Thomas Johnson High School. Ethan will be majoring in biology while enjoying the Durango lifestyle. Welcome Ethan!
Scheduling change: our alumni game and recruiting weekend has been moved back one week to October 14-15. High school athletes interested in playing lacrosse at Fort Lewis College can register via our recruiting questionnaire at Flclax.com
COMMITTED: Welcome to Skyhawk Nation Colton Crass! The LSM from Missoula, MT comes to Fort Lewis having just racked up 96 ground balls this year for Sentinel High School on his way to 1st team all-state honors. Off the field, @coltoncrass will be majoring in exercise science/education and minoring in coaching while enjoying the snowboarding and disc golfing around town. Welcome Colton!
Hitting the road this weekend looking for future Skyhawks, send us a message if you’re interested in learning more about Fort Lewis College and our lacrosse program.

The Skyhawks are welcoming new members. If you are interested in playing lacrosse at Fort Lewis College. Please email Head Coach Tom Mudrak at btmudrak@fortlewis.edu